Department of Geography
University of Zurich 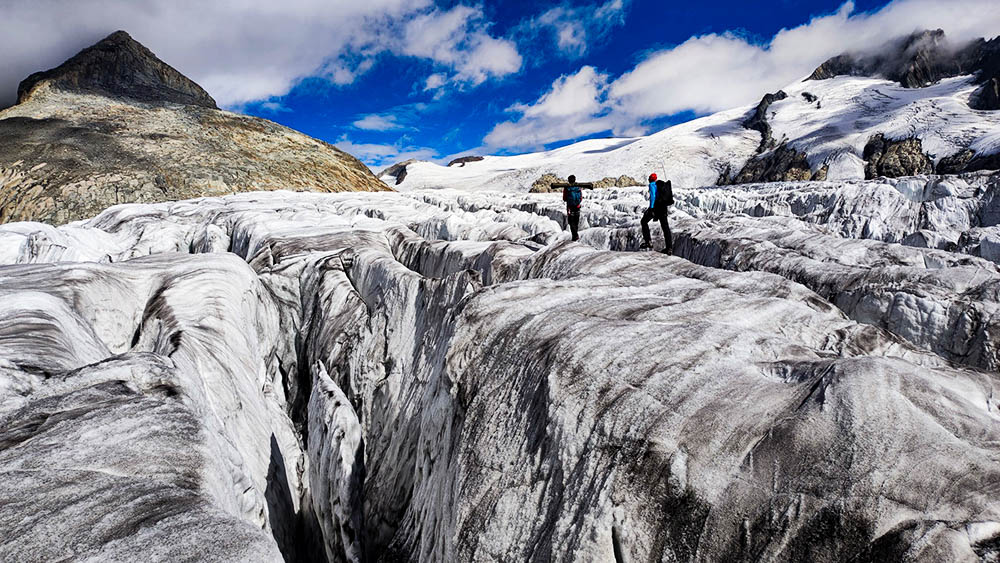 2022 was a disastrous year for Swiss glaciers: all ice melt records were smashed by the great dearth of snow in winter and continuous heatwaves in summer. More than 6 percent of the ice volume was lost, reports the Swiss Glacier Monitoring Network (GLAMOS), in which UZH is also involved. 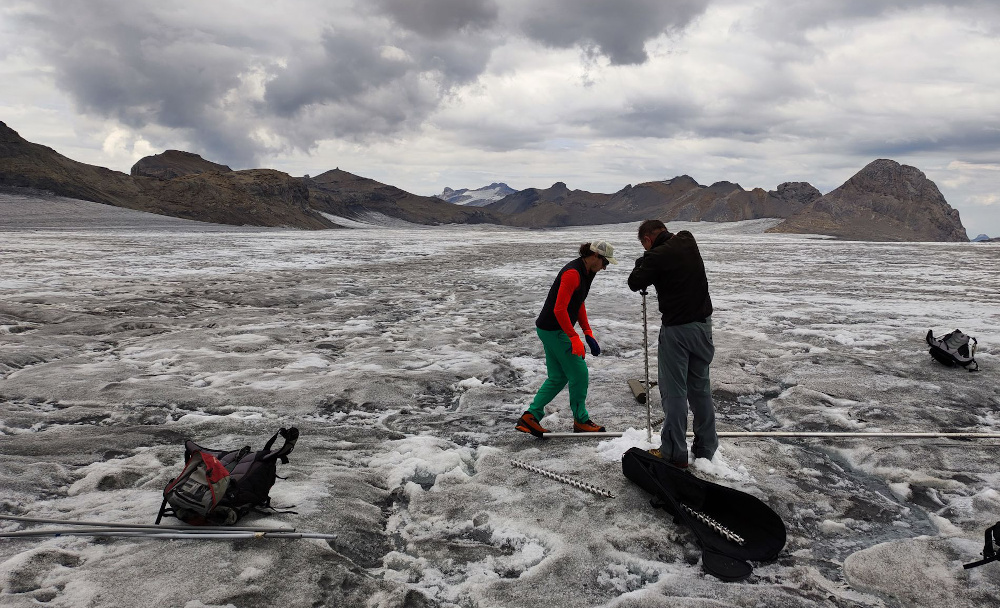 Re-drilling a measurement level on the grey, snowless surface of the Plaine Morte glacial plateau (Bern). A layer of ice up to 5 metres thick melted here this year. For the glacier to be in balance with the climate – in other words, “healthy” – around 1 metre of winter snow should still be lying. Image: M. Huss

Melt rates have far exceeded the previous records from the hot summer of 2003: the glaciers have lost around 3 cubic kilometres of ice in 2022; more than 6 percent of the remaining volume. By way of comparison, up to now, years with an ice loss of 2 percent have been described as “extreme”. The loss was particularly dramatic for small glaciers. The Pizol Glacier in the canton of St. Gallen, Vadret dal Corvatsch in Grisons and the Schwarzbachfirn in Uri have practically disappeared – measurements were discontinued. But the trend also reveals how important glaciers are to the water and energy supply in hot, dry years. The ice melt in July and August alone would have provided enough water to fill all the reservoirs in the Swiss Alps from scratch.

In the Engadine and southern Valais, a 4- to 6-metre-thick layer of ice at 3000 metres above sea level vanished. In some cases, this was more than double the previous maximum. Significant losses were recorded even at the very highest measuring points (e.g., the Jungfraujoch). The average loss of ice depth across all regions is around 3 metres, sometimes reaching figures exceeding 4 metres (e.g., the Gries Glacier in Valais and Ghiacciaio de Basòdino in Ticino). Observations show that many glacier tongues are disintegrating and patches of rock are rising out of the thin ice in the middle of glaciers. These processes are further accelerating the decline.

Snow in 2021/22 almost exclusively in the early winter

There was prior warning of these events: the snow cover in the Alps was light to a degree rarely experienced in the past, particularly in the south of Switzerland. Added to this was the large volume of dust from the Sahara between March and May. The contaminated snow absorbed more solar energy and melted faster. As a result, the glaciers had already lost their protective coating of snow by the early summer. The continuous and sometimes tremendous heat between May and early September therefore decimated the glacial ice.

For most glaciers, snow cover arrived at the beginning of November in the winter of 2021/22, more or less in line with the norm. However, it vanished at all altitudes around one month earlier than usual. The series of snow measurements on the Weissfluhjoch (Grisons, 2540 m), which goes back more than 80 years, revealed the second earliest date ever for the snow melt (6 June). The hot, sunny, cloudless summer months beat the records. For example, the temperature remained above freezing point on 41 percent of all days between June and August at the Jungfraujoch MeteoSchweiz weather station (Valais (south side), 3571 m). The average is 25 percent. The summer was also extremely dry. Up to mid-September, only a few centimetres of new snow fell in the high mountains.

Last winter produced very little snow in general, particularly on the Swiss plateau and in Southern Switzerland. Basel and Lucerne recorded no snow at all. Snow was particularly scant on the southern slopes of the Alps, especially in Ticino and the Simplon area. In many areas, almost no snowfall occurred below the 1600 m level. At several measuring stations in Ticino, the average depth of snow recorded was the lowest since measurements began in 1959. Above 2000 m, the average depth of snow on the southern slopes of the Alps was only around half the usual level. On the northern slopes and in the Engadine, it was around 70 to 100 percent of the normal long-term figures (1991-2020). 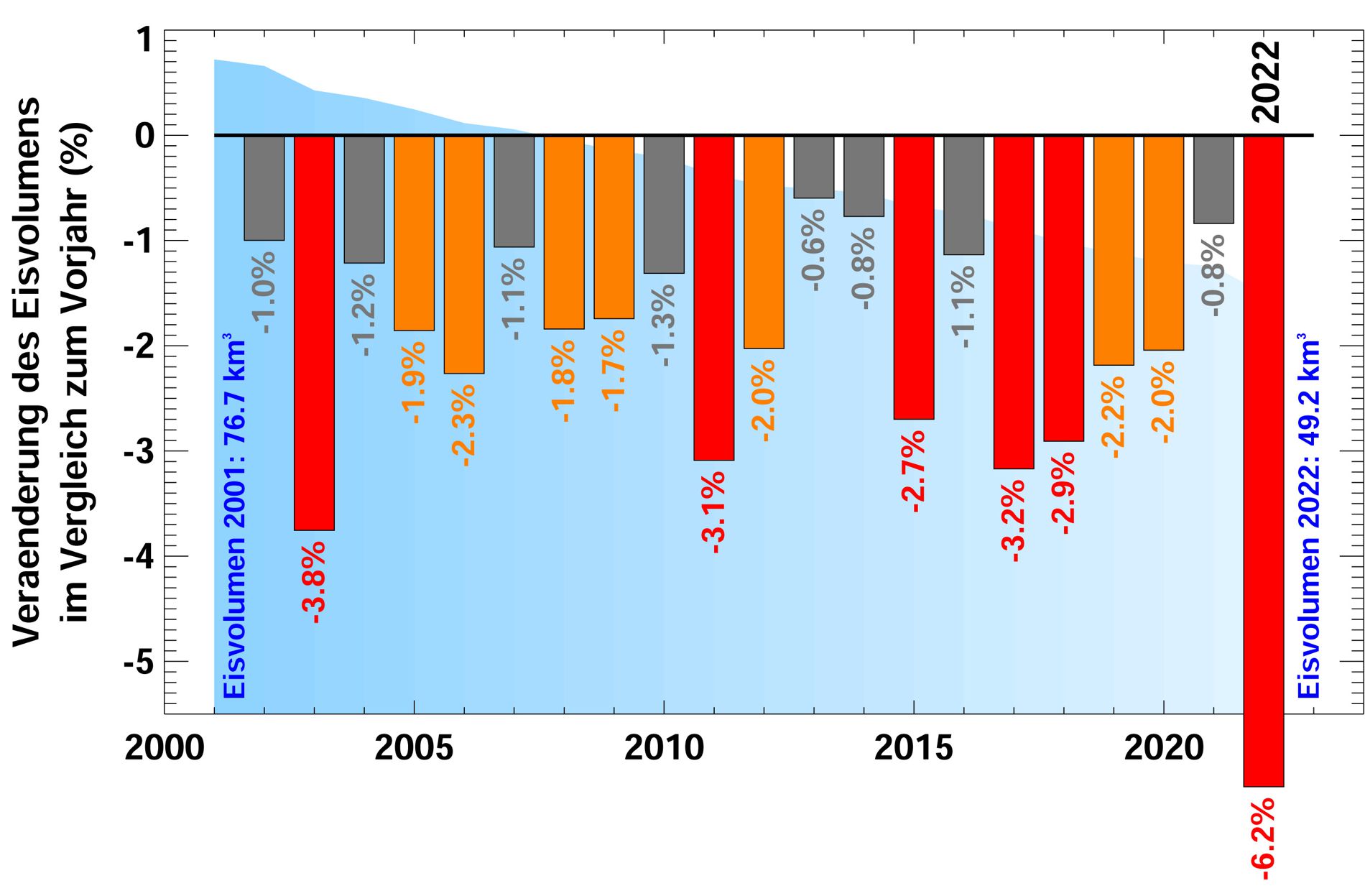