Last autumn, many people could not quite understand the choice of Corina Leuch's master's thesis topic. A pan­demic outbreak later things are quite different. Spatial and socio-economic conditions play an important role in the spread of diseases.

In the event of a pandemic, delayed reactions and a decentralized approach by the authorities at the start of a follow-up wave can lead to longer-lasting, more severe and more fatal consequences. An interdisciplinary team compared the Spanish flu of 1918 and 1919 in the Canton of Bern with the coronavirus pandemic of 2020. 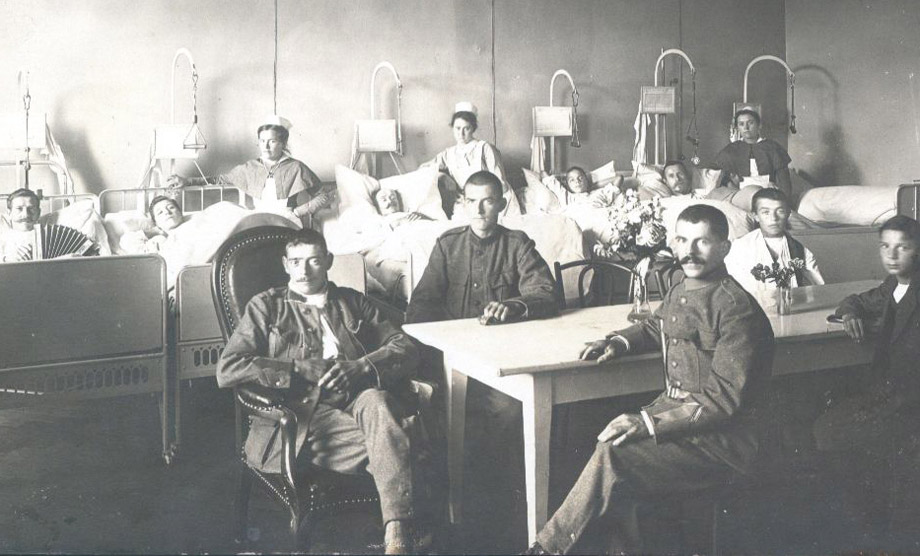 Members of the army during the Spanish flu in Olten hospital. (Photo: A. & G. Zimmermann, Geneva, undated [1918]. Archive of the History of Medicine, University of Zurich, estate of Leonie Moser)

The Spanish flu was the greatest demographic catastrophe in Switzerland’s recent history, causing approximately 25,000 deaths in the country during 1918 and 1919. In the wake of the current coronavirus pandemic, there has been increased public and scientific interest in the events of that time. An interdisciplinary team of researchers in evolutionary medicine, history, geography and epidemiology from the universities of Zurich and Toronto has spent several years analyzing historical data on the spread of influenza-like illnesses during 1918 and 1919 in the Canton of Bern. The canton is ideally suited as a Swiss case study, because it is large and has a diverse landscape, it was hit particularly hard by the Spanish flu, and right at the start of the pandemic in July 1918 it introduced an obligation to report cases.

The results of the new study show that the spread of Spanish flu differed depending on the region. In the first wave in July and August 1918, the Canton of Bern intervened relatively quickly, strongly and centrally, including by restricting gatherings and closing schools. “We see from the numbers that these measures – similar to today – were associated with a decrease in infection numbers,” says co-first author Kaspar Staub of the Institute of Evolutionary Medicine at the University of Zurich. After the first wave had subsided, the canton lifted all measures entirely in September 1918, which led to a rapid resurgence of cases and the onset of a second wave after only a short time.

Delayed action at start of second wave was fatal

At the beginning of the second wave in October 1918, the Canton of Bern reacted hesitantly, unlike in the first wave. Fearing renewed economic consequences, the cantonal authorities left responsibility for new measures up to the individual municipalities for several weeks. “This hesitant and decentralized approach was fatal and contributed to the fact that the second wave became all the stronger and lasted longer,” says co-first author Peter Jüni of the University of Toronto.

In addition, shortly after the peak of the second wave in November 2018, there was a national strike with demonstrations on social and labor issues and, most importantly, larger troop deployments. These mass gatherings, as well as a subsequent relaxation of the ban on gatherings when the number of cases was still far too high, were accompanied by a significant resurgence in infections. Ultimately, about 80 percent of the reported illnesses and deaths were attributable to the second wave.

History repeats itself in 2020

By comparing the weekly case counts of the Spanish flu and coronavirus, the researchers found that the second wave started in almost the same calendar week in both 1918 and 2020, and the official delayed response was similar. “While there are still considerable differences between the two pandemics, the steadily increasing parallels between 1918 and 2020 are remarkable,” Staub says. The study also shows that empirical knowledge from past pandemics – for example, on the challenges and how to deal with follow-up waves – is available. “Since November 2020, deaths from Covid-19 have far exceeded those caused by cancer or cardiovascular disease and for around three months it has been the most common cause of death in Switzerland. In view of the high death rate during the second wave in comparison with other countries, and with the threat of a third wave due to virus mutations from England, South Africa and Brazil, lessons from the past could help the authorities and the public to rethink their response,” adds Jüni.

Historical archive data with relevance for the present day

The study was based on records in the Bern State Archives of cases of influenza-like illness by municipality and region, as reported weekly by doctors to the cantonal authorities. “These records are a real treasure trove and a great example of how data that is more than 100 years old can be relevant today,” Staub says. Back in 2015, the research team began transcribing the more than 9,000 medical reports with over 120,000 influenza cases from 473 Bernese municipalities between June 1918 and June 1919. They then analyzed the data using modern epidemiological methods and reconstructed the measures taken at cantonal level to prevent the spread of the pandemic to create an overall picture.

Graham Mooney: The Dangers of Ignoring History Lessons During a Pandemic. Annals.org, 9 February 2021