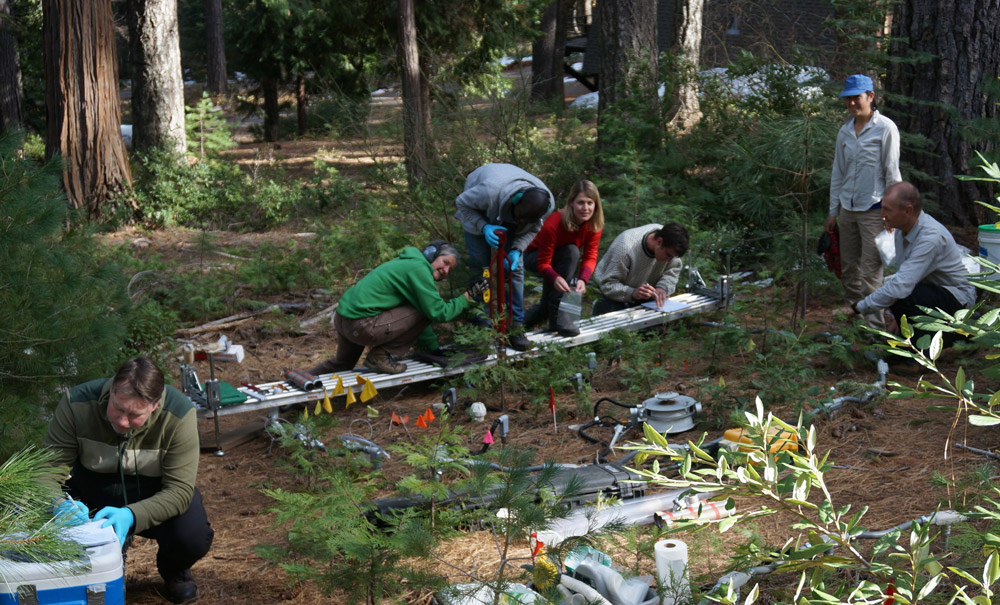 Together with colleagues from the Lawrence Berkeley National Laboratory in Berkeley (USA), researchers provided evidence that warmer temperatures lead to a significant drop in the stored carbon stock in deep forest soils. An experiment in California's Sierra Nevada forest found that the carbon content in subsoils dropped 33% over five years. GIUZ researchers contributed their expertise in biogeochemical analysis.

The research team artificially heated plots of soil down to 1 meter deep by 4 degrees Celsius, which is the amount of heating projected by century's end in a business-as-usual climate scenario. They heated the whole soil profile, whereas most previous experiments just heat the surface.

Soils contain twice as much carbon as the atmosphere does, and deeper subsoils (more than 20 centimeters) are believed to account for roughly half of the soil carbon. Colleagues from the Berkeley lab found already in 2017 that the warmed soil led to an increase of CO2 released into the atmosphere by 34 to 37%.

The new study confirms that this release has continued unabated five years later and provides physical evidence of the net transfer of carbon from the soil, where it was sequestered as organic carbon, to the atmosphere, released as a greenhouse gas. The observed carbon loss, if continuing for decades, could accelerate the warming of our climate.

Further work of the research consortium

GIUZ researchers investigated the underlying mechanisms with molecular tools, and discovered that microbes were key drivers of the the carbon loss. Higher temperatures boosted subsoil microbial activity, and consequently consumed plant material, such as root remnants much faster.