Precisely when will the long-​lost US aircraft “Dakota” re-​emerge from the Gauli Glacier? Radioactive traces from the Cold War now indicate that this will happen soon. 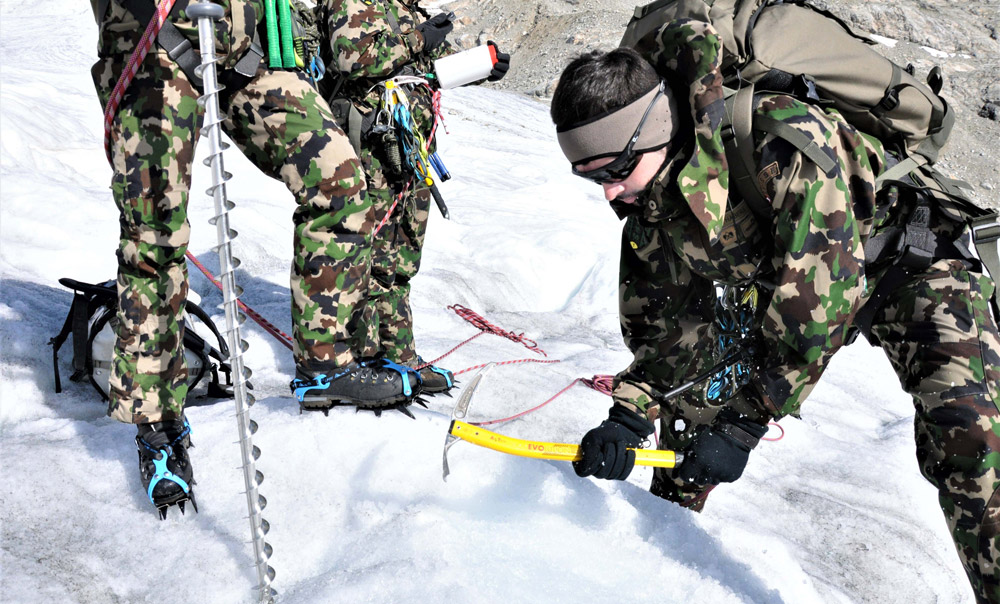 It was a time that left its mark: as the great powers of the 1950s and 1960s carried out above-​ground tests of their nuclear weapons, radioactive substances settled on the Earth’s surface all around the world. These substances can still be found today, for example in lake sediment, and indicate where relics of that age can be found.

A method that also works in the Alps

Since this also applies to glacial ice, scientists use this sediment to date such ice. Up to now, this method has been applied only to cold glaciers that do not or barely move because they are on level ground – such as some of those found in the likes of Antarctica or Greenland. But when it comes to temperate alpine glaciers, it was unclear whether the method would work because their movements and the meltwater from the ice would erase the radioactive traces, rendering them unsuitable for dating purposes.

However, this is not the case, as demonstrated by the recently published findings of Guillaume Jouvet, ETH Zurich and the University of Zurich, which he gained in collaboration with scientists from the Laboratory of Hydraulics, Hydrology and Glaciology (VAW) at ETH Zurich, Spiez Laboratory and members of the Swiss Armed Forces NBC Defence Laboratory 1. The starting point for the study was a query from the Swiss Armed Forces, which offered to send soldiers to the glacier to collect samples. Spiez Laboratory’s role was to help Armed Forces representatives test the samples for radioactive substances. As Switzerland’s reference lab, Spiez Laboratory has the equipment required to perform such delicate tests.

The question was, where exactly should the soldiers drill to ensure they sampled ice from the right period? The ETH researchers had the answer. A computer model allowed them to reconstruct the glacier’s movements, showing them where to find ice from the 1950s and 1960s. The researchers had recently used the same model to calculate when and where the remains of the legendary Dakota aircraft would emerge. Back in 1946, the US military aircraft crashed in the Bernese Oberland and has been lost in the ice of the Gauli Glacier ever since. Only a few years ago, the first fragments of the aircraft appeared on the surface.

However, the ETH researchers had to concede that their calculations were off. None of the ice samples collected in 2018 showed traces of plutonium from the nuclear weapon test period. “It’s actually not all that surprising that our calculations were imprecise,” Jouvet says. “Our model requires that we have fairly precise data on the amount of snow deposited in the upper section of the glacier, on ice melt and on the surface flow velocities of the ice,” Jouvet explains. “Unfortunately, since this data is not available for the Gauli Glacier, we had to infer them indirectly from climate and remote sensing data. Because this estimated data is inevitably imprecise, the further back in time the starting point for the calculations is, the more susceptible to error the results of the model are.”

Since the chemical analysis showed that first set of ice samples did not cover the whole nuclear weapon test period, in summer 2019 the Swiss Armed Forces collected a second, wider series. For these specialised soldiers, who in an emergency must be able to identify traces of nuclear, biological and chemical weapons, this was a welcome training exercise. Helped by favourable weather conditions, the soldiers were able to collect samples from over 200 locations. In total, they removed almost half a tonne of ice from a two-​kilometre stretch covering the entire breadth of the glacier. These samples were then sent to Spiez Laboratory for radiochemical processing and analysis – this time with success.

“The core samples from the second set clearly show the two main peaks of pollution by radioactive substances from 1957 and 1962, with contamination ending abruptly after 1963,” Jouvet reports. Thanks to the new analysis data, the researchers were able to recalibrate the flow model. Overall, it has become clear that the Gauli Glacier has been moving towards the valley faster than was previously thought.

Based on the new findings and the age of the ice, the researchers can now map the age of the ice over the entire glacier. The map shows that the oldest ice is located in the lower part of the glacier’s tongue, while the most recently formed ice is in the upper part. “This is the first map of its kind,” Jouvet says. “It might also prove helpful to other scientists looking to examine ice of the past century. Our map lets them see immediately where to find it without having to resort to the expensive and complex process of deep drilling.”

The new data also makes it possible to predict more accurately when the Dakota will re-​emerge. Based on an earlier calculation, ETH researchers concluded that the largest portion of the wreck would emerge 1 km upstream where the last wreckages were found to date. “At the time, our explanation for this discrepancy was that after the crash, parts of the aircraft had been transported down the glacier,” Jouvet explains. But this explanation is no longer necessary: based on the new data, Jouvet now expects the largest portion of the wreck will emerge in the next few years relatively close to the existing finds.