This text is the slightly adapted version of a Who's who @ GIUZ post.

What is the contribution of sounds to the way people perceive landscapes? Using automatic text analysis methods, Olga Koblet tries to answer this question in her research. 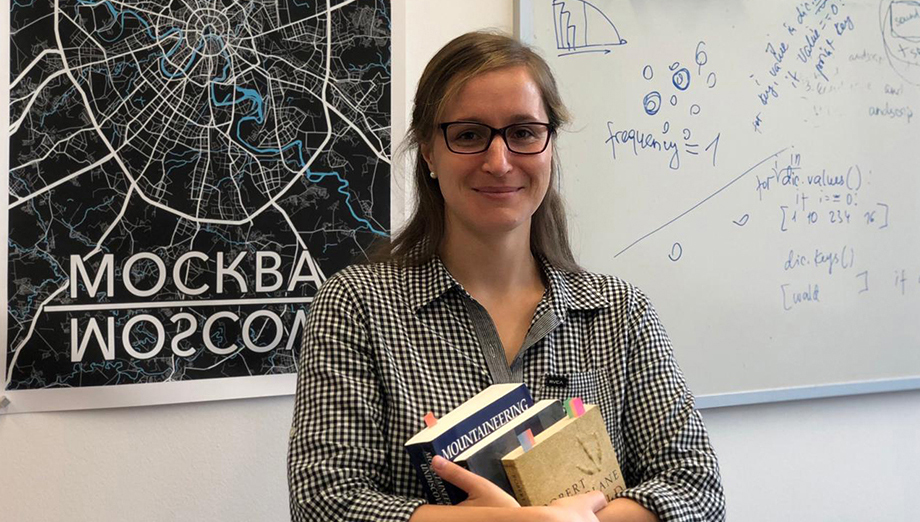 Olga, tell me about your research.

We investigate how we can use text sources to automatically extract information about the landscape. We want to know how people perceive the sounds of the landscape. Because it's not only the amplitude and frequency of an acoustic signal that is crucial. For example, a jet engine and a waterfall produce similar sounds, but the one is considered annoying, the other beautiful.

Why is this important?

Policy makers need to know which places are important for people, for example for creating protected areas or for construction and road planning. So far, this information was gathered by doing interviews. This is time-consuming. Our method covers large spatial scales, and it can give priority to those mentions that appear multiple times. In this way it really generates added value.

And interestingly, we came across many unexpected contrasts in these text sources, such as places that are described as very quiet even though they are close to a big city. If these places are protected, a large number of people can benefit from such oases of calm. Think for example of Uetliberg. In this sense, it's a human-centered approach that we pursue.

Which texts did you analyze?

We use the descriptions of millions of georeferenced pictures that were collected within the Geograph project. For every square kilometre of Great Britain and Ireland, volunteers collected geographically representative photographs and added descriptions of these areas. That's an exceptional data set, and importantly, all the content is shared using Creative Commons Licenses. We did our analysis for the territory of British Isles.

We also searched the internet for reports related to place names of the Lake District area, an area in Northwest England, to generate a text corpus independent of projects like Geograph. In the map you can see some results with extracted descriptions referring to sounds, smells and visual perception. 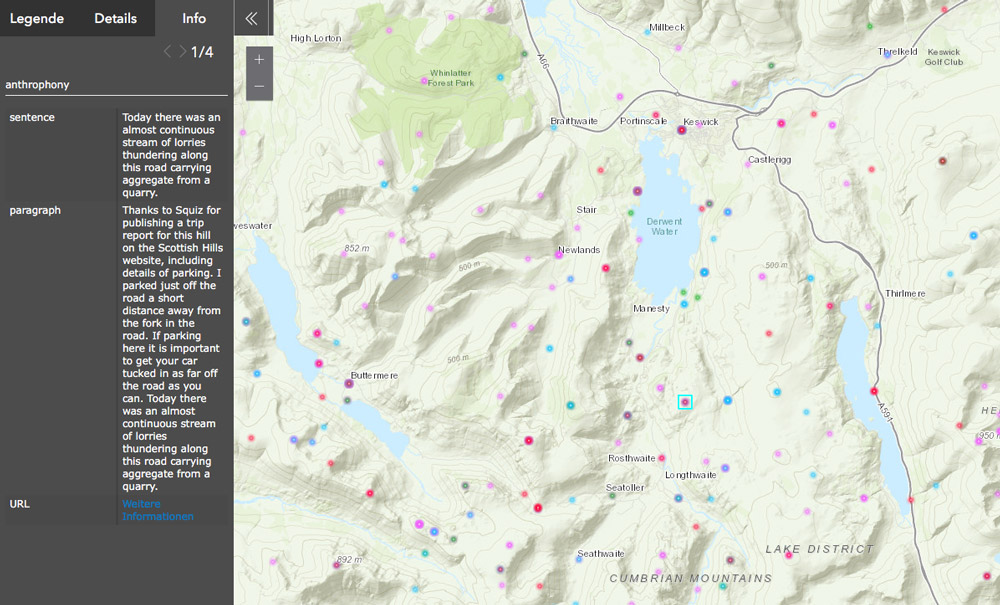 What will your next steps be?

We would love to apply our methods to texts from Switzerland, which in turn means dealing with texts not only in English, but also French, German and Italian.

Apropos languages: Your german is excellent. How did it happen that you came from Russia to Switzerland?

I studied geography in Moscow and then I decided to do my master's studies at ETH Zurich in geomatics, with a focus on remote sensing. Later I was part of the team developing Atlas der Schweiz at the Institute of Cartography and Geoinformation at ETH Zurich. This was an exciting time, since we did a lot of conceptual work. But at some point, it turned more into a production mode. Then I figured it would be great to do a PhD.

How did you come to this topic?

At the Institute of Cartography and Geoinformation, there was a project where several literary scientists together with cartographers were producing maps of the locations mentioned in different novels. It's called A Literary Atlas of Europe. These locations were extracted manually, and I wondered how well an automatic analysis of text would work. Nevertheless, after many discussions I decided to use texts with more geographical and practical relevance. That's how I came to my current project.

And besides work, what else are you interested in?

I love to read. I was always dreaming of having a job where I can read the whole day. Before you can get started with these automatic methods, you have to read and classify a lot of texts manually. So, it couldn't have been better for me!

And I play the violin in a large symphonic orchestra, that's a wonderful, but time-consuming hobby.  Finally, I've been doing orienteering since I lived in Moscow. Maps are part of my life since I was a teenager.

Map of sound descriptions for the territory of British Isles

A Literary Atlas of Europe