An international team with the collaboration of GIUZ researchers has developed a new model for simulating both iceberg calving and the tsunamis that are triggered as a result. Their method can help improve hazard assessment in coastal areas and refine the empirical calving models used to evaluate rising sea levels.

Glacier calving into the ocean are one of the largest contributions to sea-level rise in the future. To better understand the correlation between the size of an iceberg and the amplitude of the tsunami that results from its calving, GIUZ researchers have together with a team of scientists from Snow Avalanche Simulation Laboratory at EPFL, University of Pennsylvania, the University of Nottingham, and WSL Institute for Snow and Avalanche Research, just unveiled a new method for modeling these events. Their work appears in Communications Earth & Environment.

This is the first study to simulate the phenomena of both glacier fracture and wave formation when the iceberg falls into the water. The goal was to model the explicit interaction between water and ice. However, this has a substantial cost in terms of computing time. Therefore, it was decided to use a continuum model, which is very powerful numerically and which gives results that are both conclusive and consistent with much of the experimental data. 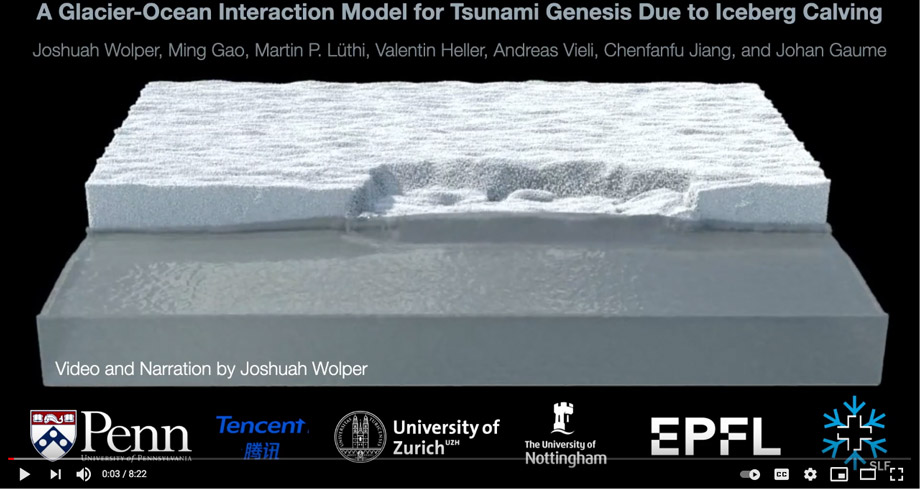 Calving occurs when chunks of ice on the edge of a glacier break off and fall into the sea. The mechanisms behind the rupture generally depend on how high the water is. If the water level is low, the iceberg breaks off from the top of the glacier. If the water level is high, the iceberg is longer and breaks off from the bottom, before eventually floating to the surface owing to buoyancy. These different mechanisms create icebergs of different sizes-and therefore waves of different amplitudes.

Combining film material with scientific data to reconstruct a tsunami

In Greenland, the scientists placed a series of sensors at Eqip Sermia, a 3-km-wide outlet glacier of the Greenland ice sheet that ends in a fjord with a 200 meters ice cliff. Back in 2014, an iceberg measuring some 1 million m3 (the equivalent of 300 Olympic-sized swimming pools) broke off the front of the glacier and produced a 50 meters high tsunami; the wave was still 3 meters high when it reached the first populated shoreline some 4 kilometers away. "This wave was filmed from a tour boat at meters distance from the calving face. We could simultaneously measure it with a terrestrial radar interferometer and a tide gauge", says Andreas Vieli, one of the co-authors from GIUZ. This enabled a reliable reconstruction of the event - and was already published in 2016.

New project on glacier dynamics in the pipeline

A new project led by Martin Lüthi and funded by Swiss National Science Foundation will investigate the dynamics of Greenland's fastest-moving glacier, Jakobshavn Isbrae. It will combine data from individual field experiments in Greenland with the results of simulations run using the SLAB model.