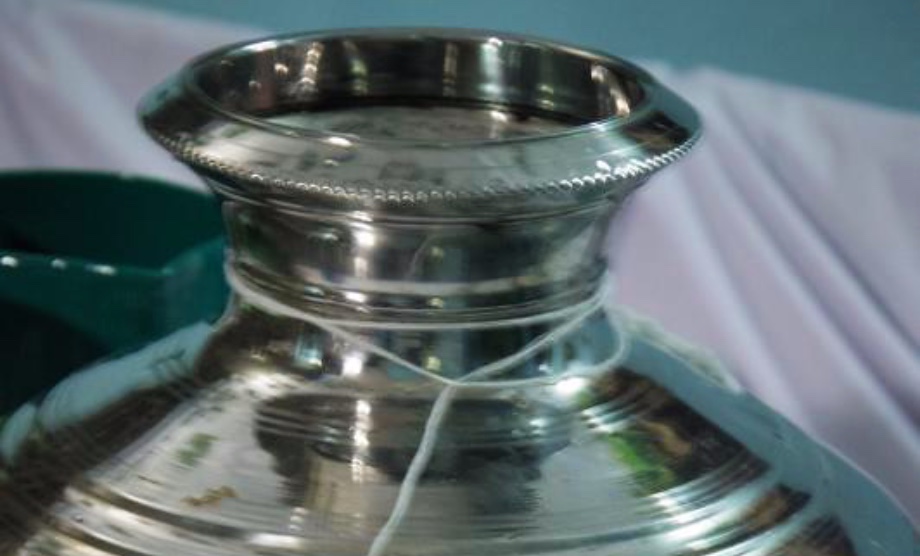 On March 26th the Chairman of the GMOA, Consultant Pediatric Neurosurgeon Anuruddha Padeniya, extolled the virtues of pirit, or ritual Buddhist chanting, on national TV. Padeniya claimed that studies carried out in other countries have proven that pirit has physiological benefits and pirit pæn (water that is blessed during chanting) undergoes molecular changes making it beneficial to human health. The TV host eagerly latched on to Padeniya’s comments. He pointed out that people on social media with high school science knowledge derided traditional Sinhala religio-cultural practices, while here was a highly qualified medical professional affirming its value. Many of the other members on the panel discussion eagerly endorsed these views. Padeniya also extended his views about the virtues of pirit to the idea of fostering apēkama or a traditional and healthy lifestyle inspired by a sense of authenticity. The institutional legitimacy of these views were affirmed when the Sri Lankan state decided to use air force helicopters to scatter pirit pæn from the air.

Padeniya’s comments came in a context where the COVID-19 pandemic is raising questions about dominant and normative knowledge systems. A faltering Euro-American response–with some parts of the Global South outperforming the Global North in public health management–has fueled this trend. In Sri Lanka such a challenge to the dominance of ‘western’ science has emerged in the form of the promotion of traditional medicinal and religious practices. What is particularly intriguing is that the main agents of this challenge have been western medical doctors, or at least the frontline leadership of the powerful Government Medical Officers Association (GMOA)–the trade union of state-employed-western-medical practitioners in the country. The GMOA’s vocal promotion of traditional medicine and Buddhist religious ritual is representative of how so-called alternatives to ‘western modernity’ have long genealogies in anti-colonial nationalism. The GMOA’s advocacy of traditional medicine and Buddhist ritual are an extension of a long-standing Sinhala nationalist discourse about the ‘scientific’ nature of Sinhala and Buddhist culture. At the same time, western doctors’ strategic positioning of themselves as ‘modern’ custodians of traditional knowledge also points to tensions within this discourse of patriotism, science, and indigeneity.

The ideas Padeniya expressed are not new. In the late-nineteenth century Anagārika Dharmapala—a globe-trotting lay Buddhist missionary and a key figure in Sinhala nationalist thinking—made similar claims about Buddhism. Dharmapala was keen to claim coevality with western scientific knowledge in a context where local knowledge was seen as quaint and superfluous. Dharmapala solved this dilemma though the creative appropriation of the already existing ‘rational’ discourse about Buddhism promoted by orientalist scholars like Max Muller  who saw Buddhism as a philosophy, consonant with modernity and science.

The idea that Buddhism is scientific has persisted in Sri Lanka–particularly among educated middle-class Buddhists who form the vast majority of professional bodies like the GMOA. At one level then, Padeniya’s invocation of pirit addressed and old but persistent colonial dilemma. Padeniya’s remarks, and remarks of like-minded commentators, are often accompanied by a particular ‘anti-western’ tone, which says, “you” (an imaginary West and its perceived sympathizers within Sri Lanka) “say we are unscientific but we will prove you wrong”.  In essence this attitude resolves a postcolonial ontological dilemma. It allows an individual to be simultaneously modern and traditional.

However, such anti-Western patriotism is not limited to the Sinhalese. Depending on the context, other Sri Lankans could also feel pride when Sri Lanka bucks the trend – for instance, winning the cricket world cup which was seen as a ‘Sri Lankan’ victory against Australia and ‘western’ cricketing nations. But what is different in the invocation of pirit is that the sense of cultural pride it invokes is ethno-nationally biased. While the idea of ‘indigenous knowledge’ as an alternative to ‘western knowledge or medicine’ is something not confined to Sri Lanka or the Sinhalese—and even western science conducts research into such alternatives—in Sinhala nationalism it is only Sinhala and Buddhist practices that are seen as scientific. The discourse of pirit-as-science unfortunately replicates the history of Sinhala nationalist exceptionalism that marginalizes other communities. This is especially so in the COVID-19 context where the Muslim community’s concerns about the cremation of COVID victims, rather than burial as mandated by Islam, is characterized as parochial and unscientific. Sinhala culture is normative while the culture of others such as Muslims (and this can easily extend to other minority communities) is seen as aberrant.

This Sinhala-centric discourse of indigenous knowledge, however, has a contested history. During one of Sri Lanka’s most significant political events–the 1956 elections in which S.W.R.D. Bandaranaike came to power riding a wave of Sinhala and Buddhist nationalist sentiment–Ayurveda doctors formed a significant pillar in a core village-based constituency (colloquially dubbed the panca maha bala wēgaya or ‘the five great forces’). For many Sinhala nationalists 1956 rather than 1948–the official year of independence–marked emancipation from a west-sympathizing comprador political class. One of Sri Lanka’s twentieth century literary giants Martin Wickremasinghe dubbed it the ‘fall of the Brahmin/comprador’ class (bamunu kulaye biňda wætīma). There was much expectation that this was the dawn of an indigenous economic and cultural revival, but this dream soured quickly and Bandaranaike’s political career was cut short by assassination in 1959. The professional recognition of Ayurveda doctors or the institutionalization of Ayurveda as an alternative to western medicine did not materialize. Western medicine on the other hand grew exponentially and became the default health option in the country.

Padeniya’s comments on pirit and traditional healing must be considered in this context. It is as a western trained scientist that he and other medical professionals promoting indigenous knowledge do so. In so doing they position themselves as rational, scientifically trained interpreters of indigeneity, unlike Ayurveda practitioners. Therefore, this articulation of patriotic indigenous science celebrates the local while simultaneously delegitimizing local agents lacking the social capital of western-trained medical practitioners. This is a classic nationalist dilemma where one class appropriates the right to speak on behalf of a weaker other.

COVID-19 has thrown open a space where the hegemony of ‘western’ science and knowledge is being challenged. This space has also facilitated the emergence of other marginalized alternative discourses. However, the local-alternative versus the western-normative is not a simple binary. The local discourses which seek to challenge and displace ‘western’ knowledge are themselves implicated in power hierarchies that exclude various social groups. The ‘local’ can be as hegemonic as the ‘global’.

Harshana Rambukwella is Director and Professor in English at the Postgraduate Institute of English, the Open University of Sri Lanka.