This text appeared in the Journal of Ecology Blog.

In recognition of his work, Bernhard has chosen a selection of papers published in Journal of Ecology that represent his research highlights. You can read all of these papers for free in a Virtual Issue. 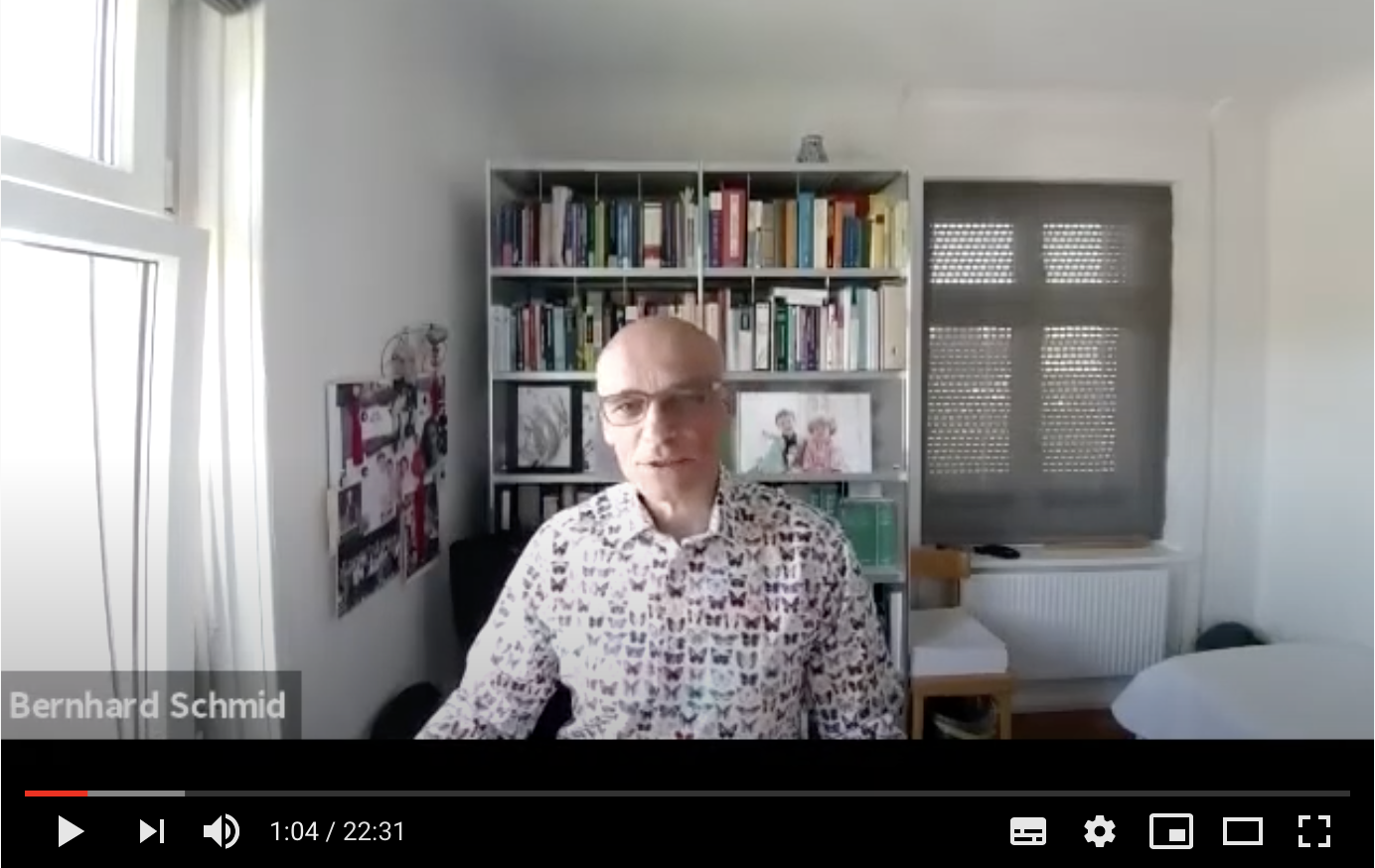 Bernhard was also interviewed by the Journal of Ecology Executive Editor, David Gibson. They discuss Bernhard’s work and ecological inspirations.

Bernhard Schmid is the Eminent Ecologist award winner for 2020. In a blog series, he gives further insight into his career, research and ecological experiences. 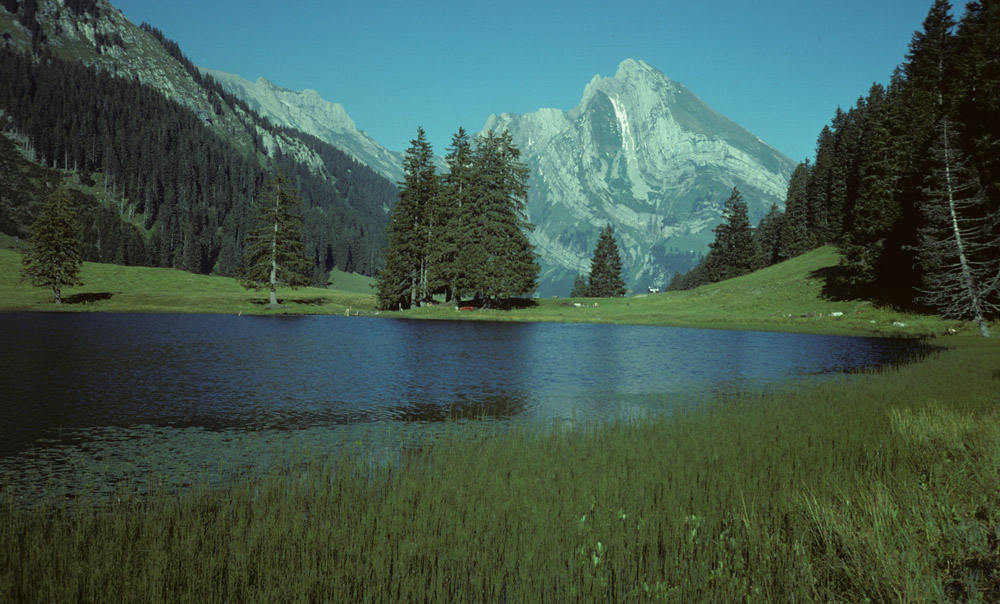 I became interested in ecology at teachers’ training college, where we had lots of practical biology classes. In my final year, I mapped all herbaceous species in a 5-ha wetland and analysed the data with so-called ‘phytosociological’ methods. The idea that plant communities might be more than random assemblies of species co-occurring at a particular site intrigued me most.

However, while studying biology at the University of Zurich, my professor, Christopher Cook, advised me not continue on this track. Instead, I started to work with the one plant species; the one that was giving me most headaches in the previous mapping work, Carex flava. It is a complex plant, with hybridising subspecies that offered an ideal case for studying the role of population biology in evolution. Carex is by far the most species-rich angiosperm genus in the world (more than 2500 species) and is particularly interesting because of its holocentric chromosomes. These can break and fuse without too much disturbance to meiosis and thus new species can evolve more easily than in most other angiosperms. For my PhD, I had all the freedom to study the biology of C. flava in my own way, re-inventing lots of plant demography and population biology for myself, as I later learned.

Chris Cook suggested John Harper’s lab for a postdoc, mostly because I had a young family and we did not want to move to a city but rather be in the countryside. John Harper was in this beautiful, remote place called Bangor in North Wales. My first intention for the postdoc was simply to get some experience living abroad and, after that, look for a job in Switzerland. This all changed with the inspiring intellectual environment at Bangor and it became clear to me that I wanted to continue research in ecology. At that time, in the early 1980s, we were particularly interested in clonal plants, because they seemed to defeat most laws that had been proposed by population biologists working with animals.

Should life-history theory be applied to individual tillers or entire tussocks?

Writing up one of the thesis chapters from Zurich for my first paper in Journal of Ecology (Schmid 1984) with the help of John Harper and a PhD student called David Gibson (the current executive editor of the journal!), I was puzzled by the question of whether life-history theory should be applied to individual tillers or entire tussocks, which we called genets. In C. flava, both tillers and genets show a tendency to be short-lived and r-selected, but other Carex species have different life-history strategies for tillers and genets.

The work with clonal plants showed us that, in principle, all plants are populations of parts that behave as more or less independent individuals (tillers in grasses and sedges, branches in trees and even leaves in herbaceous plants). Clonal plants are just the most extreme case of modular organisation, which is a typical feature of all plants and one that sets them apart from most higher animals. If you bury a tree in sand so that only its twigs stick out, it would look just the same as a clonal plant.

Modularity has far-reaching consequences for ecological and evolutionary theory. Many scientists prefer to work with annual plants because these come closest to unitary animals and thus allow one to apply theories developed for these, suggesting that generality encompasses both plants and animals. Clonality teaches us that plant individuals should rather be compared with animal populations. It is group living in perfection, because leaves, shoots and branches are genetic kin and physiologically integrated, yet, at the same time, they have a high independence and can react differentially to the local environment.

Clonality and modularity allow plants not only to express group strategies at the genet level but also to show “behaviour” that relates to foraging and competition in animals. During my postdoc in Bangor, I was introduced to more sophisticated experiments and statistical analyses than we had done in Zurich. We chose two very ordinary lawn perennials as model plants, representing different strategies of clonal growth. We allowed them to play against each other in a special fan-design that had been suggested by John Nelder, a famous statistician in the UK (in fact, the design violates several principles, such as independence and randomisation of density treatments, but is highly efficient for estimating competition parameters).

In the resulting paper (the first of a sequence of three in Journal of Ecology), we described how Bellis perennis, the species with short stolons and thus compact genet architecture, was winning in high density (tip of the fans), because it could better hold space, whereas Prunella vulgaris, the species with long stolons, was winning in low density (bottom of the fans), because it could faster occupy empty space (Schmid and Harper 1985). 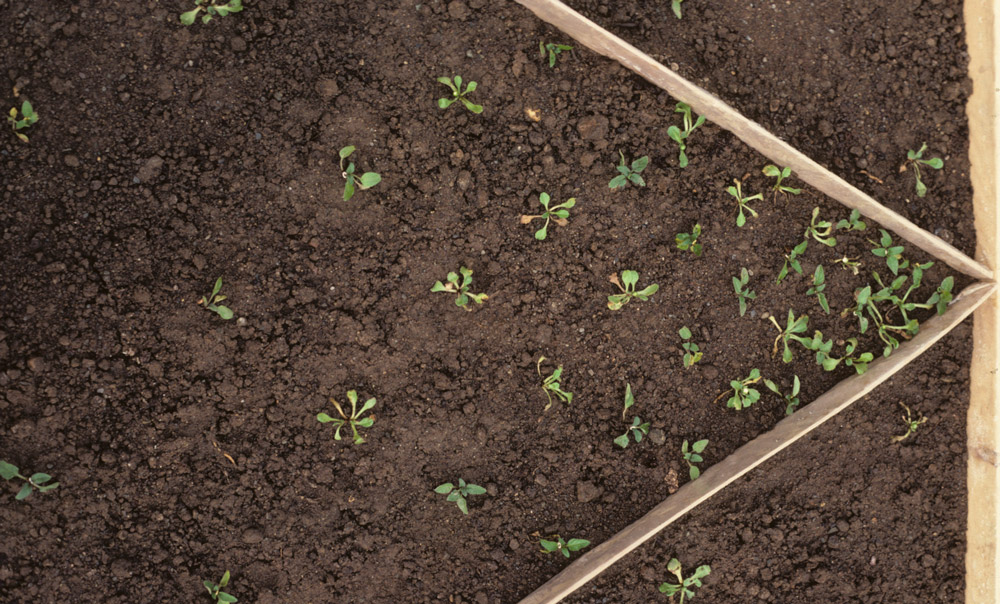 Bellis perennis and Prunella vulgaris planted in a fan-design. Photo: B. Schmid

Influence of architecture on plant foraging behaviour and competition

I was so fascinated by these different plant strategies that I continued to work with a second pair of species, representing compact vs. spreading architectures, Solidago altissima and Aster lanceolatus, during a second postdoc with Fakhri Bazzaz at Harvard in Cambridge, USA. That work, consequently published in the journals of the Ecological Society of America, indicated the far-reaching consequences of the different architecture types regarding plant foraging behaviour and competition, from genets to leaves.

Leaf populations of A. lanceolatus grow exponentially and form thin canopy layers because the selfish leaves compete more against leaves from other genets that intermingle with each other (Schmid and Bazzaz, 1994). In contrast, S. altissima has long-lived leaves that show more correlative behaviour, compete less for light within genets and thus develop deep canopy layers. In this case, genets do not intermingle and thus leaf–leaf interactions (shading) are more frequent within than between genets.