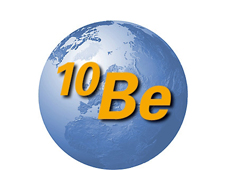 Cosmic rays impinge on an exposed rock surface and induce nuclear reactions with the nucleus of the minerals and create “cosmogenic isotopes”, one of them being 10Be. The concentration of these isotopes is measured by accelerator mass spectrometry (AMS) and gives a direct measure of the exposure time of the rock surface.

Since the method’s introduction it has been applied to study more and more specific questions in earth sciences and within different geomorphic contexts. The method has contributed to a significant improvement in the chronology of late-würmian and Holocene glacier fluctuations.

Meteoric Beryllium is formed in the atmosphere and infiltrates into soils by precipitation where it is adsorbed by the upper  permeable layers of soil.