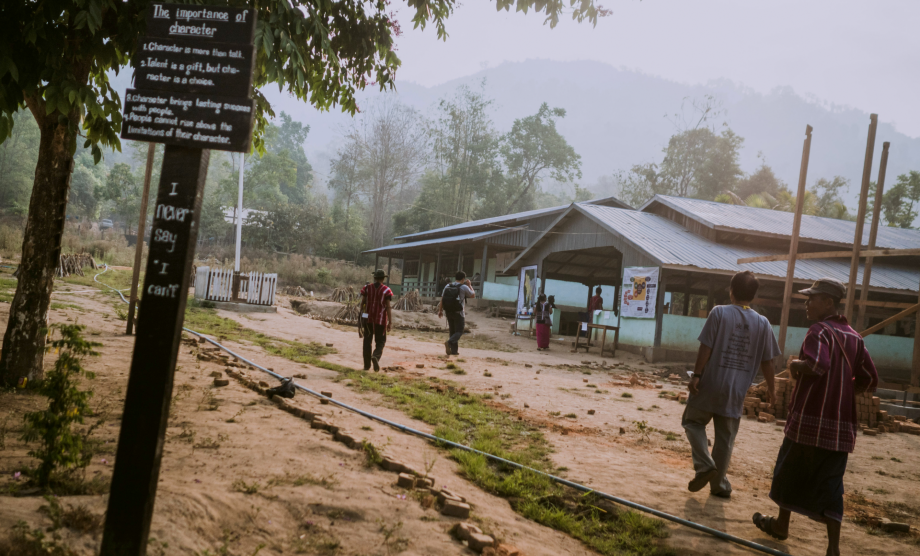 Shona Loong joined the Political Geography Group (PGG) at GIUZ in January 2022, shortly after completing her geography DPhil at the University of Oxford.

There, her doctoral research used ethnographic methods to explore how a decade of development assistance into Myanmar (2011–2021) created new power configurations in Karen State, a war-affected area close to the Thai-Myanmar border. She focused on what donors might call “civil society organisations” in Karen areas; showing how two organisations—one in Myanmar government-controlled areas, and the other in area held by the Karen National Union (KNU)—navigated the ongoing conflict between these actors. Her thesis also challenges the term “civil society” on two fronts. Firstly, what does civil society, a term which originated in liberal democratic thought, mean in a postcolonial context where state-society relations are highly contested? And secondly, what can civil society do in war-affected areas, where people are often assumed to be either combatants or victims of violence? Shona used this examination of civil society to discuss how international development is a central—albeit incomplete—process by which territory is made in the postcolonial world.

Shona describes her ongoing research interests, which build on her doctoral research, and her future plans, in this way:

“Three related themes drive my research. For one, I’m interested in how peripheral areas are a crucial vantage point from which we can understand the postcolonial state. I see conflict not as evidence of state failure, but as central to state-making. I’m also interested in non-state actors, like civil society, rebel groups, and mutual aid groups, and how they bring people together in unexpected configurations. Social life and social reproduction persist, even in violent contexts. By highlighting how marginal actors forge hope, solidarity, and community, I hope to attest to how scholars can think with them to produce peace, rather than solve their problems from the outside-in.

Besides this, I’m interested in the politics of development. I have always been drawn towards studying liminality and ambivalence; themes that run through the scholarship and practice of international development. On one hand, international development has been rightfully criticised as a hegemonic, neo-colonial force. On the other, local actors can use the resources and expertise afforded by donors to advance their own struggles. Binary thinking fails to encapsulate these tensions, which I centre in my work.

Moreover, my research and work experiences outside academia have shown how research does not often reach the people who participate in it. In recent years, I have written several open-access commentaries and reports for various outlets, in the belief that research must be made accessible outside of academia, as well as mentored Burmese researchers as part of various schemes.  But is this enough? I am not sure. A further question is what it means to do research in/on Myanmar, ever since the coup on 1 February 2021. After the coup, the junta cracked down on local organisations and launched heavy offensives in areas I worked in, dashing the very aspirations I documented in my work.  Several weigh on my mind: how to keep my interlocutors safe, the value of research in these times, and more broadly, how violence shapes the politics of knowledge—within academia and without, and in Myanmar and beyond.

I never imagined I would live and work here in Zurich. In my first months, I often woke up to marvel at the fact that I ended up here at all. Growing up in Singapore, I was not exposed to anthropology, ethnography, or development studies until I started postgraduate degree. Sometimes the world I inhabit still feels foreign and new. Nonetheless I am excited to learn in conversation with my colleagues and students. My research so far encapsulates but a small slice of all that political geographers work on. Already, in a few months here, I have learned much about new ideas, theorists, and themes: frontier dynamics; citizenship; civil war. I look forward to the months and years ahead.”

More information about my online publications and reports is available at https://www.shonaloong.com/publications-1
I write about these aspirations in the commentary, ‘Hope and heartbreak: Karen communities in the wake of the coup,’ at https://teacircleoxford.com/opinion/hope-and-heartbreak-karen-communities-in-the-wake-of-the-coup/